Federal Councilor Ignazio Cassis, head of the Swiss Federal Department of Foreign Affairs, and Markus Leitner, ambassador of Switzerland in Iran, made a visit to Isfahan on September 5, 2020 and had an official meeting with representatives of Isfahan University of Technology (IUT) as the Swiss Desk, Iranian Leading House for Science and Technology Cooperation between Iran and Switzerland.  Prof. Dr. Mohammad Javad Omidi, Acting President for International Affairs and Technology Infrastructures, Prof. Dr. Sima Fakheran, Director of International Scientific Cooperation Center and Head of Swiss Desk at IUT, Prof. Dr. Mahmud Ashrafizadeh and Prof. Dr. Peiman Mosaddegh, IUT faculty members from the Faculty of Mechanical Engineering at IUT as grant winners of joint research projects and scientific collaborations between Iran and Switzerland from IUT attended this meeting.

Prof. Dr. Sima Fakheran, Head of the Swiss Desk and Director of the International Scientific Cooperation Center of IUT, pointed to the history of scientific cooperation between Iran and Switzerland and presented a brief report on the process of establishing the Swiss Desk as a national reference for international scientific cooperation between the two countries. Expressing interest on the issue of scientific diplomacy, she mentioned that the consortium of the top universities of Isfahan (IUN) and the municipality of Isfahan city have also applied scientific diplomacy for fostering relations with Isfahan’s sister cities. She added that despite the existing political constraints, scientific communication can provide a stable and safe path for interactions between the two countries. Prof. Dr. Fakheran explained that determining the joint science day of Iran and Switzerland is a special proposal of Isfahan University of Technology on behalf of the Iranian Ministry of Science, Research and Technology for further considerations by the foreign ministers of the two countries.

Dr. Mohammad Javad Omidi, Acting President of Isfahan University of Technology for International Affairs and Technology Infrastructures, also presented a report on grants and support tools for joint research by Iranian and Swiss scientists and the development of future collaborations.

The visit of the high-ranking Swiss delegation to Iran has been organized for the occasion of the 100th anniversary of diplomatic relations between the two countries and will be continued for the two more days and meeting senior officials of the I.R. Iran. 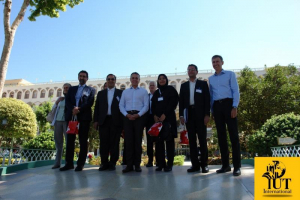